DACA Still in Limbo, May Go Back to the Supreme Court 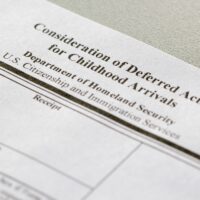 We’ve talked before about the never-ending challenges to Deferred Action for Childhood Arrivals (DACA). DACA was established by former President Obama as a means to shield immigrants from deportation if they were brought to the United States as children. Conservatives, including former officials in the Trump administration, have questioned the legality of the program on several occasions. Last year, a federal court in Texas ruled that DACA was unlawful on essentially procedural grounds, attacking the way in which the program was established rather than the substance of the program. The Fifth Circuit Court of Appeals recently called into question that decision, though there’s reason to believe that decision will now be the final word on the matter. Continue reading to learn about the current state of DACA and the legal challenges it faces. Call a knowledgeable New York immigration lawyer for help with any green card, citizenship, visa, or other immigration status issues.

As a refresher: DACA is a federal program that allows certain undocumented immigrants to obtain renewable work visas and avoid deportation. To qualify as a so-called “Dreamer,” an applicant must be between the ages of 15-30, must have been under age 21 as of June 15, 2012, must have arrived in the United States before turning 16 years old, and must have lived in the United States continuously for at least five years. The program was intended to give a pathway to legal status for non-citizens who have spent their entire lives in the United States despite a lack of papers, through no fault of their own.

DACA has been challenged many times by conservatives who oppose immigration forgiveness. President Trump moved to unilaterally stop the program in its entirety, claiming DACA fosters “open borders” and encourages non-citizens to bring minor children across the border.

The challenges to DACA continued. Several state attorneys general, including Texas Attorney General Ken Paxton, filed a lawsuit claiming DACA was unlawful. In July 2021, a federal court in Texas ruled that DACA was, indeed, enacted in violation of the APA. The court found that the prior administration had not followed appropriate public notice and comment procedures in enacting DACA. The Biden Administration appealed.

In light of the ruling, the government stopped considering new DACA applicants. The court did not end DACA wholesale, however. Current DACA recipients can continue to benefit as well as apply for visa renewals while the appeal is pending.

In an October 2022 decision, the Fifth Circuit Court of Appeals largely agreed with the district court’s ruling: the original procedure for creating DACA was insufficient per the APA. However, while the appeal was pending, the Department of Homeland Security (DHS) issued a final regulation codifying the DACA program. The rule was issued on August 30, 2022, and takes effect on October 31, 2022. That final rule did go through a full public notice and comment period, per the APA, which the original memorandum establishing DACA had not.

In light of the new rule, the Fifth Circuit sent the case back to the Texas district court. The court must take a fresh look at DACA to consider whether the program now satisfies the APA. The Fifth Circuit’s decision maintains the status quo–the administration will not consider new applicants, but current DACA recipients can stay in the program and continue to apply for visa renewals as needed.

The district court judge also expressed substantive concerns with DACA, beyond the administrative issues. It’s likely that his second look will not be particularly favorable.

Regardless of which way the court rules, many legal scholars and immigration advocates–for and against DACA–believe it extremely likely that DACA will be back before the Supreme Court before long. The Court’s ultimate decision will depend on a number of factors, including the substance of the challenge before them, the makeup of the Court, and any changes to DACA made in the meantime.

If you or a loved one could benefit from DACA, or if you have any questions about citizenship, visa status, or other immigration issues, please contact the dedicated and compassionate immigration attorneys at Gladstein & Messinger at 718-793-7800 or email us at queensimmigration@gmail.com to schedule an appointment.