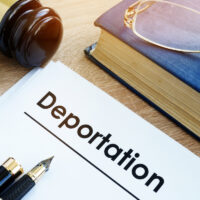 In the last few weeks, many applicants for relief from deportation and their family members received notice that US Citizenship and Immigration Services (USCIS) was no longer considering requests for deferred action. The move by USCIS was another in a line of actions by federal immigration officials to not only crack down on undocumented immigration but also to restrict avenues for legal immigration. Thankfully, USCIS just backtracked a bit from the administration’s latest draconian move. Read on for details about the recent USCIS policy shift, and contact a passionate New York immigration lawyer to answer any questions about asylum eligibility.

Many immigrants who are in the country “illegally” did not sneak across the border. Family members of green card or visa-holders, for example, who are in the country legally based on their spouse or parent may have that legal status revoked when that family member passes away or leaves the country. Some people lose their jobs and struggle to find another in the same industry, which is required by many types of work visas.

Deportation need not happen immediately, however. If the immigrant has a compelling circumstance to stay in the country, such as a severe medical condition currently under treatment, then they may apply for a deferral to either fix the visa issue (gain more time to apply for a green card or get another job, for example), or until the circumstances are resolved (e.g., the medical issue is treated). Deferred action was given to an average of around 20,000 immigrants each year from 2012 to 2016.

Recently, USCIS shocked the thousands of immigrants around the country seeking legal status by sending notices that USCIS is simply no longer accepting deferred action requests outside of certain military exceptions. Immigrants undergoing life-saving treatment were told they would be immediately deported unless the applicant instead applied to Immigration and Customs Enforcement (ICE). ICE officials, for their part, were shocked by the news and stated that they had no plans to review deferral requests on a systematic basis. Immigrants can appear for deportation hearings and plead their cases, but they may face immediate deportation or create legal hurdles for applying for green cards down the line. Immigration activists have been working to respond to the new policy.

USCIS backtracks, will reopen some cases that were already active

After a public backlash regarding the move, USCIS just announced that they plan to reopen nonmilitary deferred action cases that were pending as of August 7, 2019. For future cases, circumstances remain unclear. ICE has no program for reviewing medical deferral requests, for example. Instead, immigrants who have been ordered removed can apply to ICE for a “stay of deportation or removal” after exhausting all other administrative remedies. ICE has sole discretion as to whether to grant such a request or instead detain or deport the applicant.

If you or a loved one are facing deportation or need assistance with any other immigration issue, contact the passionate and experienced Queens immigration lawyers at Gladstein & Messinger at 718-793-7800 or toll-free at 800-339-0535.