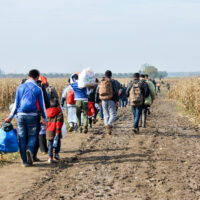 The former administration under President Trump enforced a number of draconian policies aimed at limiting all forms of immigration–whether “legal” or “illegal,” whether based on work visas, student visas, or compassionate asylum. Under one such policy, applicants for asylum would be forcibly removed from the United States to wait in Mexico for the months or years it might take to get an asylum hearing, remaining exposed to whatever dangers led to the petition for asylum in the first place. President Biden and immigration authorities in his administration have sought to walk back many of these policies, although they have faced resistance from state authorities opposed to immigration.

The Supreme Court of the United States recently sided with the Biden administration, finding that immigration officials had the authority to walk back the “remain in Mexico” policy. Continue reading to learn about the case, and call a knowledgeable New York immigration lawyer for help with status adjustments, green cards, deportation defense, or other immigration status issues.

Under former President Trump, the Department of Homeland Security (DHS) instituted a program known as the Migrant Protection Protocols (MPP), colloquially called the “Remain in Mexico” policy. Under the policy, applicants seeking asylum at the southern U.S. border, primarily from Central America, were forced to wait in Mexico while their claims were processed. Immigration and civil rights advocates lambasted the program as cruel and unnecessary. Applicants were stuck in Mexico for the months needed to obtain a decision, regardless of whether they faced persecution outside of the U.S. or whether they were originally from Mexico.

The Biden administration decided to rescind MPP. On June 1, 2021, the DHS Secretary issued a memorandum officially ending the program. The States of Texas and Missouri challenged the administration’s actions, arguing that the June 1 memo violated the Immigration and Nationality Act (INA) and the Administrative Procedure Act (APA). The states argued that the agency lacked authority to rescind the policy under the INA, which they argue was made mandatory by Congress, and that there were administrative irregularities with how the decision was made. A federal district court in Texas agreed and ruled that the Biden administration violated immigration law by choosing not to detain and remove every alien attempting to enter the country.

Texas and Missouri argued that, because the language regarding detention is mandatory, and the agency lacks the resources to actually detain every applicant, failing to “return” applicants to Mexico results in a systemic violation of the INA’s detention provisions. The Court found this argument unpersuasive: The statutory history and prior administrations’ enforcement history demonstrate that the executive has always treated the “return” provision as discretionary, rather than mandatory. Nothing in the statute converts the discretionary language into mandatory language just because a separate provision of the law is not being satisfied. When Congress wants to make something mandatory, it does so. The lower court decision effectively supplanted the Executive’s decision-making powers and diplomatic relations with its own judgment.

The decision has been heralded by immigration rights activists and Biden administration officials. The MPP created a humanitarian crisis, leading to refugee camps on the Mexican side of the border. Many refugees became the target of kidnappers and drug cartels. Even applicants who did not originate from Spanish-speaking countries were forced to wait in a foreign land while awaiting a decision. As explained by the executive director of Border Network for Human Rights, a prominent human rights and immigration reform organization, the Court’s decision “is a bittersweet victory after so many lives have been lost to atrocious immigration deterrence policies both on the federal level and in the state of Texas.”

If you are seeking asylum, protected status, citizenship or permanent residence status for yourself or a loved one, or if you are facing any issues with your immigration status, contact an experienced and professional Queens immigration lawyer at Gladstein & Messinger at 718-793-7800 or toll-free at 800-339-0535.