Should the Guatemalan Refugees be Granted Temporary Protected Status? 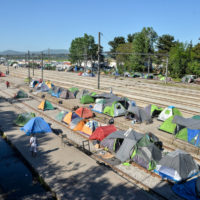 There are currently about 57,000 children in the United States from Guatemala, Honduras and El Salvador who have illegally crossed over the U.S.-Mexican border since 2011. This massive influx has overwhelmed immigration centers and created a humanitarian crisis in the country while also igniting a firestorm of debate about the nation’s immigration laws, border enforcement, and deportation/removal of undocumented or illegal immigrants.

The Guatemalan children could stay in the U.S. without fear of deportation if they were granted Temporary Protected Status (TPS). An immigrant who is given TPS is not removable and cannot be detained by ICE (Immigration and Customs Enforcement) based on immigration status. A TPS grantee can also obtain an Employment Authorization Document to legally work in the U.S and apply for other immigration benefits the person is otherwise eligible for. A person in the U.S. on TPS could even work toward lawful permanent residence by applying for nonimmigrant status and then an adjustment of status.

In order to be eligible for TPS, one must be a national of a TPS-designated country, or at least have habitually resided in such a country if the person has no nationality. Additionally, the person must file for TPS during open initial registration or a re-registration period. Finally, the person must be continuously physically present in the U.S. since the most recent designation for his or home country and also continuously residing in the U.S. since the date specified for the home country. A person may be ineligible for TPS if he or she: has a felony or two or more misdemeanor convictions in the U.S.; is inadmissible under certain grounds; or is subject to a mandatory bar to asylum due to persecution of another, terrorist activity, or other grounds.

A country is usually designated for TPS based on some pressing reason for its residents to flee, such as civil war or armed conflict, an environmental disaster such as a hurricane or earthquake, or an epidemic outbreak of disease. Presently, eight different countries have been designated for TPS, including Guatemala’s Central American neighbors El Salvador and Honduras.

So far, nearly 30,000 people have signed a petition asking the U.S. to grant Temporary Protected Status to Guatemalans due to destruction from recent major earthquakes and tropical storm Agatha.

The White House response to the petition indicates that it would prefer a more comprehensive approach to “commonsense immigration reform” that would address the issues for all the illegal immigrants in the country. The response also points out that certain individuals may be eligible for immigration assistance on humanitarian grounds due to “Special Situations.”