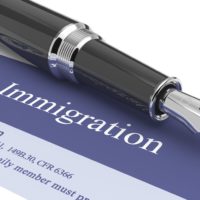 Brett Kavanaugh, President Trump’s second nominee to the Supreme Court, was appointed to the Court after an embittered and controversial confirmation battle. Whatever the truth behind the misconduct allegations, his conservative leanings have always been clear to both supporters and opponents of his nomination. His views on executive power and immigration were readily apparent during his second-ever day of oral argument on the high court. Continue reading for details about the Kavanaugh’s first oral hearing and the argument, and contact an experienced Queens immigration attorney for help in your immigration case.

The matter of Nielsen v. Preap concerns a 1996 federal law, 8 U.S.C. § 1226(c), that requires officials to detain immigrants who are subject to deportation due to certain types of criminal activity after release from criminal custody. The detainees can then be held for another 15 years or more based on the same crime for which they had already served time. The applicable crimes include any drug crime (even minor crimes of possession), having ever been in the U.S. illegally or violated any condition of entry into the U.S., aiding any other person in entering the country illegally, and other crimes including those involving violence or terrorism.

Three lawful permanent residents had committed crimes in the past, been convicted, and served out their criminal sentences. They were not then detained or deported. Instead, many years after having served their time and been released, they were detained by immigration officials, without bail hearings. The lawful permanent residents filed a class action lawsuit for habeas relief, claiming that they and others who were not detained immediately after release from criminal custody should not, under the terms of the applicable law, be subject to detention years and years later.

The Ninth and First Circuits agreed with the class that the detention must take place promptly after release from criminal custody, while other circuits concluded the law gave the government the authority to detain the immigrants at any time, indefinitely. The Supreme Court took the case to resolve the circuit split.

At oral argument, Justice Kavanaugh sides with the government

Opponents of the law took the position that the plain language of the statute requires the government to act immediately to detain immigrants or not at all, rather than leave them with the specter of possible detention for the rest of their lives. U.S. citizens benefit from statutes of limitations that keep the government from arresting someone for a minor crime committed 10 or 20 years earlier, and they are not expected to be punished severely for otherwise minor crimes. A petitioner in one of the related cases heard by the Court had a 20-year-old conviction for the unarmed snatching of a woman’s necklace; the government argued that “sudden snatching” is a violent crime under the law, as would be grabbing someone’s purse from their shoulder.

The argument focused on when the government must detain the immigrant under the law. Justice Kavanaugh stated that the statute “did not itself” impose a “time limit,” and thus detaining someone 20 years later was permissible. Nor does Kavanaugh believe they should be granted bail hearings – as would any U.S. citizen arrested for a crime – and permission to return to their home countries; “Congress did not trust those hearings” according to the justice. The Court’s liberal justices appeared in favor of setting a reasonable time limit after release from custody within which federal authorities must act, or granting bail hearings for such detainees. The Court should issue its opinion later this term.

If you have questions or concerns about your citizenship status, contact the compassionate and knowledgeable Queens immigration lawyers at Gladstein & Messinger at 718-793-7800 or toll-free at 800-339-0535.