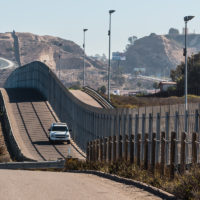 Following an Easter Sunday tweetstorm on the topic of border security and illegal immigration, President Trump has signed a declaration stating that members of the US National Guard shall be sent to the American border with Mexico. The President’s concerns over border security appear to have been stoked after reports of a caravan of migrants from Central America heading toward the US were aired on the Fox News show Fox and Friends.

Trump’s plan to send National Guard troops to the border appears to have originated with a news report on Sunday, April 1, 2018, of a group of migrants from Central America who were traveling north toward Mexico in a caravan. Reporters who have spoken to the migrants state that most are fleeing intense gang violence in their home countries by finding a new home in Mexico or the US, with those traveling to the US planning to file for asylum. In the memorandum officially deploying the National Guard troops, Trump states that the reason for the deployment was to provide for security of the US while it is “imperiled by a drastic surge of illegal activity on the southern border.” This is despite the fact that illegal border crossings into the US are currently at near-historic lows. The two previous US presidents deployed national guard troops to the US border with Mexico, as well. Trump’s memorandum states, “the crisis at our southern border once again calls for the National Guard to help secure our border and protect our homeland.”

The details of how many troops will be deployed and when are not yet entirely settled. Secretary of Defense James Mattis signed an order that authorized up to 4,000 troops to be deployed, but the exact number that will be deployed is not yet clear. The State of Texas has announced that it will deploy roughly 250 troops to the border on Monday, April 9, with additional troops to be added when details of the operation are clarified. Arizona’s department of military affairs has also announced that the state would be sending 150 troops to the border. While troops are being sent with the purpose of supporting existing work by federal agents working in border security, they will be subject to strict limits on how involved they can be in border security efforts by federal law. When troops have been deployed in the past, they have largely supported border security by helping with training, construction, or gathering intelligence.

If you’re in need of skilled and experienced legal help with a visa, application for US citizenship or other immigration matter in New York, contact the Queens immigration law attorneys at Gladstein & Messinger at 718-793-7800.