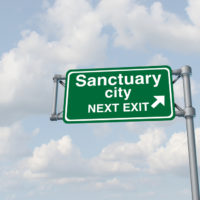 The US Department of Justice under Attorney General Jeff Sessions has become increasingly aggressive and inhumane in its enforcement of immigration laws. Recently, the Justice Department filed a lawsuit against the State of California based on its “sanctuary state” policy. While California is the first state to face targeting by the Justice Department, some legal scholars suggest that it might not be the last. Read on to learn whether other states and cities with sanctuary policies, such as New York City, could face similar treatment, and contact a knowledgeable New York immigration lawyer with any additional questions.

The Justice Department filed its lawsuit against California and two of the state’s leaders on Tuesday, March 6, 2018. The lawsuit claims that California’s self-proclaimed status as a sanctuary state and its laws supporting these aims hinder the ability of Immigrations and Customs Enforcement (ICE) agents to enforce federal immigration laws, potentially threatening the safety of California’s citizens and others. The lawsuit claims that certain California laws are unconstitutional; namely, the law preventing private employers from cooperating voluntarily with ICE agents, as well as a law preventing state and local police from notifying federal agents of the release of undocumented individuals, or of transferring undocumented persons to federal custody.

California is not the only part of the country with sanctuary laws providing certain protection to undocumented persons from federal immigration agents. New York City has its own sanctuary laws, though they are less protective than those in place in California. The Justice Department has threatened to pull federal funding from New York City and other jurisdictions that refuse to share information between local law enforcement and federal immigration authorities, and New York’s state assembly passed a bill that would designate New York as a “sanctuary state.” New York does permit information sharing between local law enforcement and ICE authorities when it is holding an undocumented person who has committed one of a list of serious or violent crimes.

While New York’s protections are more subdued than those in California, three local district attorneys came together to implore ICE agents to cease its program of conducting courthouse arrests. In 2017, immigration agents arrested approximately 130 individuals appearing at a New York courthouse, which is ten times the number of such arrests conducted in the previous year. Legal experts suggest that this policy prevents crime victims or witnesses from coming to court and obtaining the protection of the legal system. Thus far, the Justice Department has not filed legal action against New York City.

If you need assistance applying for permanent residency, citizenship, or a visa in New York, contact the dedicated and professional Queens immigration lawyers at Gladstein & Messinger at 718-793-7800.