How Long Does It Take to Get a Green Card Through Marriage? 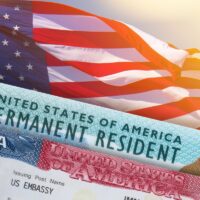 Aliens who marry a U.S. citizen or a green card holder can obtain lawful permanent residence status (green card). Marrying a citizen is one of the easier methods for obtaining permanent residence status, but like everything else in the U.S. immigration system, the process takes time. It’s important to consult with an experienced immigration attorney to ensure that you satisfy all requirements and get the process started as soon as possible to avoid delays, visa interruptions, and other immigration issues. Below, our seasoned New York immigration lawyer discusses the timeline for getting a green card through marriage.

Obtaining a Green Card Through Marriage

It will take time to obtain a green card through marriage, in large part because of the United States Citizenship and Immigration Services (USCIS) administrative bureaucracy. There’s no initial waiting period to apply–you can start the process as soon as you can prove a bonafide marriage to a citizen or lawful permanent resident.

There are several forms to fill out when seeking a green card through marriage; Form I-130 (Petition for Alien Relative) is used to establish the marital relationship, while Form I-485 (Application for Adjustment of Status) is used to obtain the actual green card. If both spouses live in the United States, the applicant can save time by filling out both forms and sending them in a single package to USCIS. Additional forms and documents are also necessary.

If the alien lives outside of the U.S. at the time of the application, additional steps must be taken, and the process will take a bit longer. Applications for a marriage green card from outside the U.S. will likely take between 11-17 months.

Immigrants who obtain a green card through marriage must be wary of the effects of divorce. Obtaining a green card is conditioned on the applicant remaining married to the U.S. citizen for a minimum duration in order to demonstrate the marriage is legitimate. Divorce can affect the process, depending on the circumstances.

If the applicant has been married to the citizen for more than two years when they are issued a green card, they will receive a permanent renewable green card. The permanent card must be renewed after 10 years, but it can be renewed indefinitely. If they have a permanent green card, there’s no need to worry about divorce–lawful status is no longer conditioned on the marriage. When they renew, they will not be asked any questions about their marriage.

Divorced applicants can apply for a waiver to remove the marital conditions on their green card, but they will have to go through an additional process to prove that their marriage was legitimate, in good faith, and not entered into solely for immigration purposes. The applicant will also need to explain why the marriage ended. If the marriage ended because of bad conduct by the applicant’s spouse–such as if their spouse committed domestic violence–it may be easier to obtain the waiver.

If the applicant divorces while the original application is still pending, the immigration process will stop, and no green card will be issued.

If you are seeking asylum, protected status, citizenship or permanent residence status for yourself or a loved one, or if you are facing any issues with your immigration status, contact the professional and successful Queens immigration lawyers at Gladstein & Messinger at 718-793-7800 or toll-free at 800-339-0535.