Form I-944 May Be Gone, but the Public Charge Rule Remains: What You Need to Know 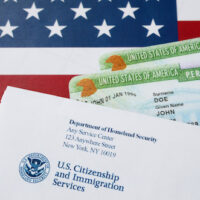 During the Trump administration and amid much fanfare (and controversy), United States Citizenship and Immigration Services (USCIS) introduced the I-944 form, titled the Declaration of Self-Sufficiency form. Pursuant to this form, applicants were asked to fill out information that would determine whether or not they would be a “public charge” in the future. A public charge is anyone that USCIS believes will need to rely on government benefits to support themselves. U.S. immigration law has long had a rule about denying admissibility or Green Cards to individuals who are or are likely to become public charges. But under former President Trump’s administration, the criteria for this rule was vastly expanded via form I-944, making it especially difficult for low-income individuals and families to immigrate to the U.S. even if they are self-sufficient economically.

After legal challenges and a change in presidential administrations, form I-944 was discontinued and is no longer required of applicants seeking to change their residency status. However, applicants for permanent residency can still be denied entry or a Green Card if they could be considered public charges. Read on to learn more about the process for applying for a Green Card, and if you are still confused or need assistance with an application denial, call a skilled and knowledgeable New York immigration attorney at Queens Immigration Law for help.

History of the Public Charge Rule

The concept of a “public charge rule” in U.S. immigration law dates back to the 1880s when Congress passed a law allowing the denial of a visa to “any person unable to take of himself or herself without becoming a public charge.” This law was updated a decade later to prevent entry to someone “likely at any time to become a public charge.”

Since 1999, immigration officials have defined a public charge as someone who is “primarily dependent on the government for subsistence.” This definition included relying on government benefits as a primary source of income or to pay for long-term care. Specifically, the government looked at sources such as Supplemental Security Income (SSI); Temporary Assistance for Needy Families (TANF), also known as welfare; General Assistance from state and local government sources, and using Medicaid for long-term care in a nursing home or other institution.

What changed under President Trump was an expansion of income sources used by immigration officials to determine whether someone might become a public charge. The lengthy 15-page I-944 form, introduced in August 2021, required a detailed record and documentation of the applicant’s health history, finances, family status, credit history, and other personal information. In addition to filling out Form I-944, applicants were required to provide proof that they were not likely to become a public charge in the future.

Form I-944 was short-lived, however. On Nov. 2, 2020, the U.S. District Court for the Northern District of Illinois vacated Trump’s Public Charge Rule. The U.S. Court of Appeals for the Seventh Circuit then stayed this decision. However, on March 9th, 2021, the US Supreme Court dismissed the case, and the USCIS announced that it would comply with the high court’s order to terminate the expanded Public Charge Rule.

What to Know if You Have a Pending Green Card Application

Individuals who applied for a green card before the termination of I-944 may have received notice regarding the discontinuation of form I-944 but may be unsure about what they need to do. For these individuals, the following guidelines are offered by the USCIS:

Work with an Experienced Immigration Lawyer

At the law office of Gladstein & Messinger, P.C., our team is committed to helping you and your loved ones navigate important USCIS application requirements. Contact our team today to learn more about how the termination of form I-944 impacts your case and your obligations moving forward in your green card application.