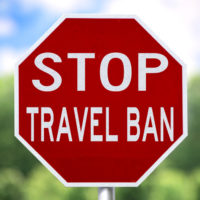 After a tumultuous week involving a great deal of uncertainty surrounding the US immigration system, including the airport detention of hundreds of individuals with valid visas to enter or re-enter the US, and the cancellation of tens of thousands of visas, a federal judge has issued an order that suspended enforcement of President Trump’s executive order regarding immigration.

The executive order issued by President Trump abruptly altered how the US authorized non-citizen entry, most notably preventing citizens of a list of seven majority-Muslim nations (Iraq, Iran, Syria, Yemen, Somalia, Libya, and Sudan) from entering the United States for 90 days. The order, first implemented on Friday, January 27th, also prevented refugees from anywhere in the world from being resettled in the US for 120 days, and put an indefinite ban on the resettlement of Syrian refugees in the US. The order resulted in the cancellation of nearly 60,000 visas and widespread chaos in US airports.

Numerous attorneys turned to the courts to fight the ban in regard to individual citizens, but the Attorney General of the state of Washington succeeding in having the order suspended entirely until courts can determine whether the order is constitutional. On the evening of Friday, February 3, a federal judge in Seattle issued an order that prevented Trump’s travel ban from being observed across the country on the basis that the ban had caused harm to the state. Namely, Judge James Robart ruled that the travel ban had caused economic damage to Washington and had interfered with important state functions such as research at public universities conducted by foreign nationals.

Travel to US resumes as before ban

The Department of Homeland Security has already ordered that border security resume inspecting travelers in the same manner as before the ban was implemented, and international airlines have again begun allowing citizens from the seven countries to board their flights. All visas which were cancelled electronically rather than by physical stamp were reinstated, and individuals whose visas were physically stamped with a cancellation can have their visa reinstated by visiting the nearest consulate or embassy. Consulates and embassies around the world have been instructed by the US State Department to resume processing visa applications in the same manner as before the executive order was issued. The Justice Department has announced its intention to fight Judge Robart’s decision, arguing that the order is necessary for the safety of Americans.

If you are in need of assistance in seeking a visa or pursuing an application for citizenship, contact the knowledgeable and dedicated Queens immigration attorneys at Gladstein & Messinger for a consultation, at 718-793-7800.