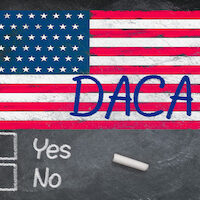 DACA (Deferred Action for Childhood Arrivals) – On July 28, 2020 Chad Wolf, Acting Secretary of the Department of Homeland security released a policy memo in response to the Supreme Court’s recent decision declaring the Trump Administration’s rescission of DACA improper.  The hope was that in light of the Supreme Court decision new DACA applications would be accepted.  Unfortunately, the memo states that USCIS will NOT accept new DACA filings despite the Supreme Court’s ruling.  Any new DACA applications will be rejected and returned.   DACA renewals will be allowed for the time being, but will now only be issued in one year increments, instead of the two years previously allowed since DACA began.  Advanced Parole, a document allowing DACA recipients to travel outside the United States, can be granted to current DACA holders, but only in “exceptional circumstances”.  This is heartbreaking news for the approximately 300,000 Dreamers who would have been eligible to file first time DACA applications and obtain work permits and social security numbers.  As of 8/24/2020 USCIS re-affirmed its position that it will not accept new applications and advanced parole will only be issued in very limited circumstances involving extreme humanitarian factors or national interest.

November 9, 2020 – Positive news with the election of Joe Biden.   President Elect Biden has stated that he will issue an executive order soon after entering office to re-instate DACA.   Obviously further updates will be forthcoming during the presidential transition.

December 4, 2020 – A federal judge in New York has ruled that USCIS must fully re-instate the DACA program as it existed prior to the Trump Administration’s attempted cancellation of the program.   The Judge ordered that USCIS was to publish rules by the end of December 7, 2020 reflecting the decision.   It is expected that for the first time since the program was stopped that new filings will be allowed along with applications for travel documents (Advanced Parole) for DACA recipients.   Extensions will also go back to 2 years.   We will post further after the expected USCIS announcement.

USCIS new public charge rules have been halted by New York Federal Court Judge.
On July 29, 2020, The U.S. District Court for the Southern District of New York issued an order stating that the motion for preliminary injunction, and temporary stay of the USCIS Final Rule on Inadmissibility on Public Charge Grounds Rule’s application is granted. The government is enjoined from enforcing, applying, implementing, or treating as effective the Rule for any period during which there is a declared national health emergency in response to the COVID-19 outbreak.  This also applies to the Department of State applying new public charge rules to consular immigrant visa cases. The order notes, “a nationwide injunction is both necessary to redress the harms caused by the Rule and appropriate given the strong federal interest in uniformity of the national health and immigration policies at issue here.”
We will need instruction on what this means for filing adjustment of status applications moving forward and the use of the new I-944 form.

On August 12, 2020 the Second Circuit Court of Appeals limited a lower court nationwide injunction on the DHS public charge rule to Vermont, Connecticut, and New York.

November 9, 2020 – Further Federal Court action has resulted in the public charge rules remaining in effect until the appeal is finalized.   So as of this date the new regulations are in effect and the new I-944 from IS required.